Is moisture causing problems in your home? Dampness in walls or floor?
Cracks in walls? Hygro Seepage ControlTM have the solution!

When reactive soil absorbs moisture it expands under the foundations which can cause severe cracking and structural damage. If moisture in the ground lies against a building, the building will eventually leak through the walls or floor, and cause damp and mould problems/issues.

The Hygro Seepage Control system can solve both of these problems.

Lots of highset houses built on sloping blocks have at least one wall of the lower floor below ground level, so do many older houses that have been raised and built in under.

From the 1960s to the 80s the best available waterproofing for those external walls was a thick, black bitumen-like paint that stopped groundwater getting through the wall. Sometimes an ag drain was installed at the base of the wall to drain away excess groundwater.

Over that time fine silt and sediment has settled into the ag drain (if it was installed) and drastically, or totally, blocked it creating even more water issues.

The Hygro Seepage Control™ system is a patented product.

It is modeled on nature and works like a sponge, attracting and soaking up water that is then pumped out and away from your wall - either into drainage or onto your garden. 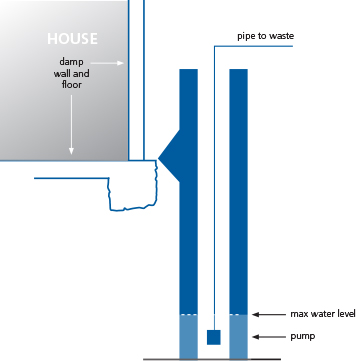